The challenge is made up of two parts: handle_client1 and handle_client2, each of which is an instance of a private set intersection protocol based on the Decisional Diffie-Hellman assumption.

Private set intersection (PSI) is a cryptographic protocol that enables two parties (Alice && Bob) to exchange information that they both share, and meanwhile leaks nothing about what they don’t share. The picture below illustrates the idea explicitly. 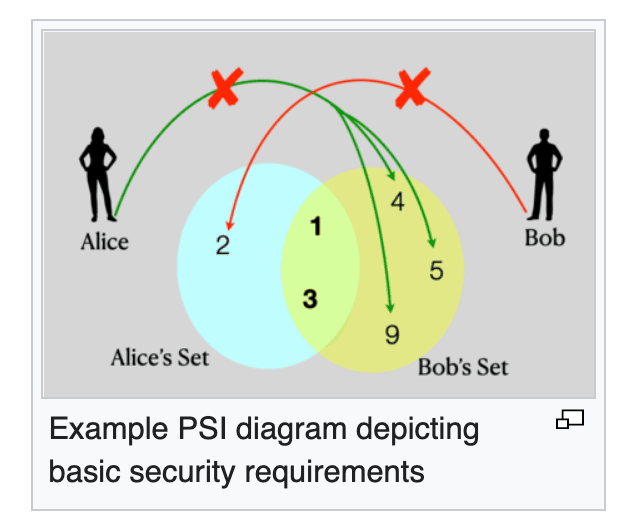 $H(\cdot)$ can be a secure hash function, or anything that functions like a random oracle.

Using hash functions is quite a simple as well as efficient way to do PSI. But, it does not protect the privacy of the two parites if the original sets do not have considerable entropy. Any malicious adversaries could mount a dictionary attack on the hash sets and recover the original sets.

Therefore, more steps are required to build a more secure PSI scheme. One that bases on the Decisional Diffie-Hellman (DDH) assumption is a PSI scheme that is a little bit more secure than that uses hash functions. The DDH assumption, in short, can be stated as: for random $a, b, c$, one cannot distinguish $(g^a, g^b, g^c)$ from $(g^a, g^b, g^{ab})$. Intuitively, the assumption is quite reasonable for that every element in the group is randomly distributed. 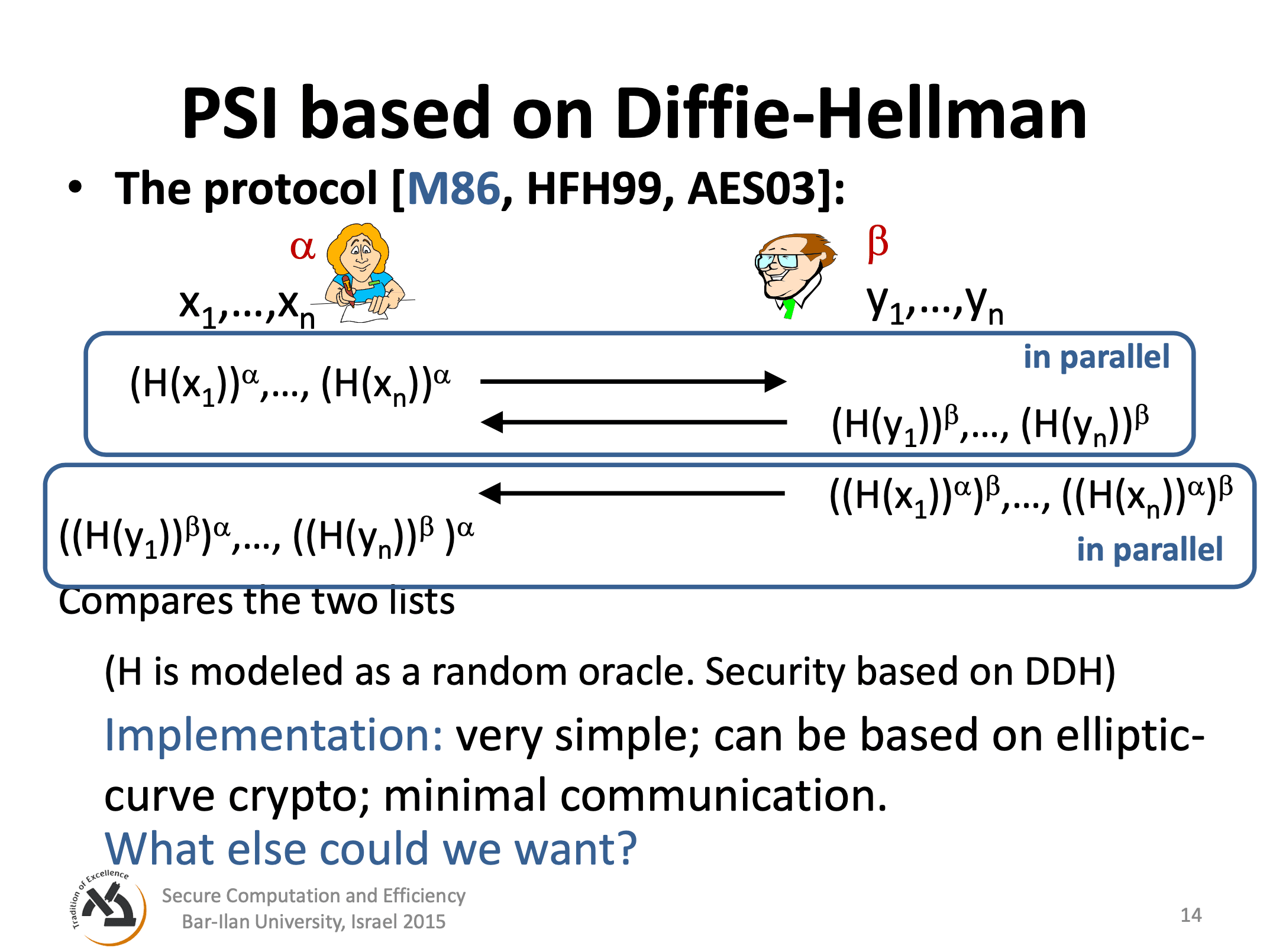 picture from the slide in BIU Winter School 2017

The PSI scheme based on DDH works as following:

Note that the order of the masked set must be kept. Otherwise, the two parties would not be able to identify which specific element they are sharing, but only got the number of the shared elements.

What if a passive attacker wants to acquire some information from this protocol?

What if one of the participant (i.e. Alice or Bob) wants to cheat and gain advantage over the other?

As a result, more sophisticated steps are required to build a robust PSI scheme. Here is a brief survey if it catches the reader’s interest. And plently of papers of this topic are waiting for those who want to explore.

Anyway, the toy PSI scheme described above is enough for us to play. And this challenege is built on top of that.

Back to this challenge, after picking up what is a PSI scheme in a short minute, it’s time to read the code and understand what the interaction between the server and client looks like.

The interaction is broken up into two parts: handle_client1 and handle_client2. The following will explain what happens in these two parts.

Upon receiving the two sets server_combined_client and server_s from the server, we can multiply the server_s by a and compare the result with server_combined_client. From the comparison, we can acquire some information about the shared elements. Unfortunately, in this challenge, the two sets are randomly shuffled such that we cannot identify which specific element we are sharing with the server set s, only to get how many elements we are sharing.

It looks like that, in order to capture the flag, we should be able to make sure that every $x_i$ equal to every $y_i$. This requices us to be access to all the elements of the server set s. So, there should be some method that we can recover the whole server set s. Following the idea, we look back on how the server set s is made up.

The key point seems to recover the secret number r (32-bit). If we can recover r, it is not hard for us to rebuild the server set s.

In a short time, we find that the second part of the server set is quite suspicious.

Look at the expressionk + CONST * (r % k), where k ranges from 1 to 4095. When k starts to increase from 1, the values k + CONST * (r % k) are very small. We can brute force and recover it by inspecting whether we share any element with the server in the handle_client1 phase.

Upon recovering the value, we can get some information about r % k. We can get the value $x_i$ such that $$ x_i \equiv r \pmod{k_i}. $$ Given enough congruence equations like this, we can apply the Chinese remainder theorem to recover r.

But it is sad that the combined sets are disordered by the server before sending to us. And it is hard for us to identify the shared elements.

Is there any way that can identify the shared elements?

@Hermes comes up with a fabulous method.

If the guess is correct, a pair of two masked points $b \cdot P_j$ and $b \cdot (s_k \cdot P_j)$ will be sent to us, where the latter point is exactly s_k times of the former. We can search for such pairs in the combined sets server_combined_client and identify which specific element we are sharing with the server!

Implementing this method enables us to recover $r$ as well as find all the 4065 elements of the second part.

Proof of Concept script (credit to @Hermes) that runs a successful recovery locally: 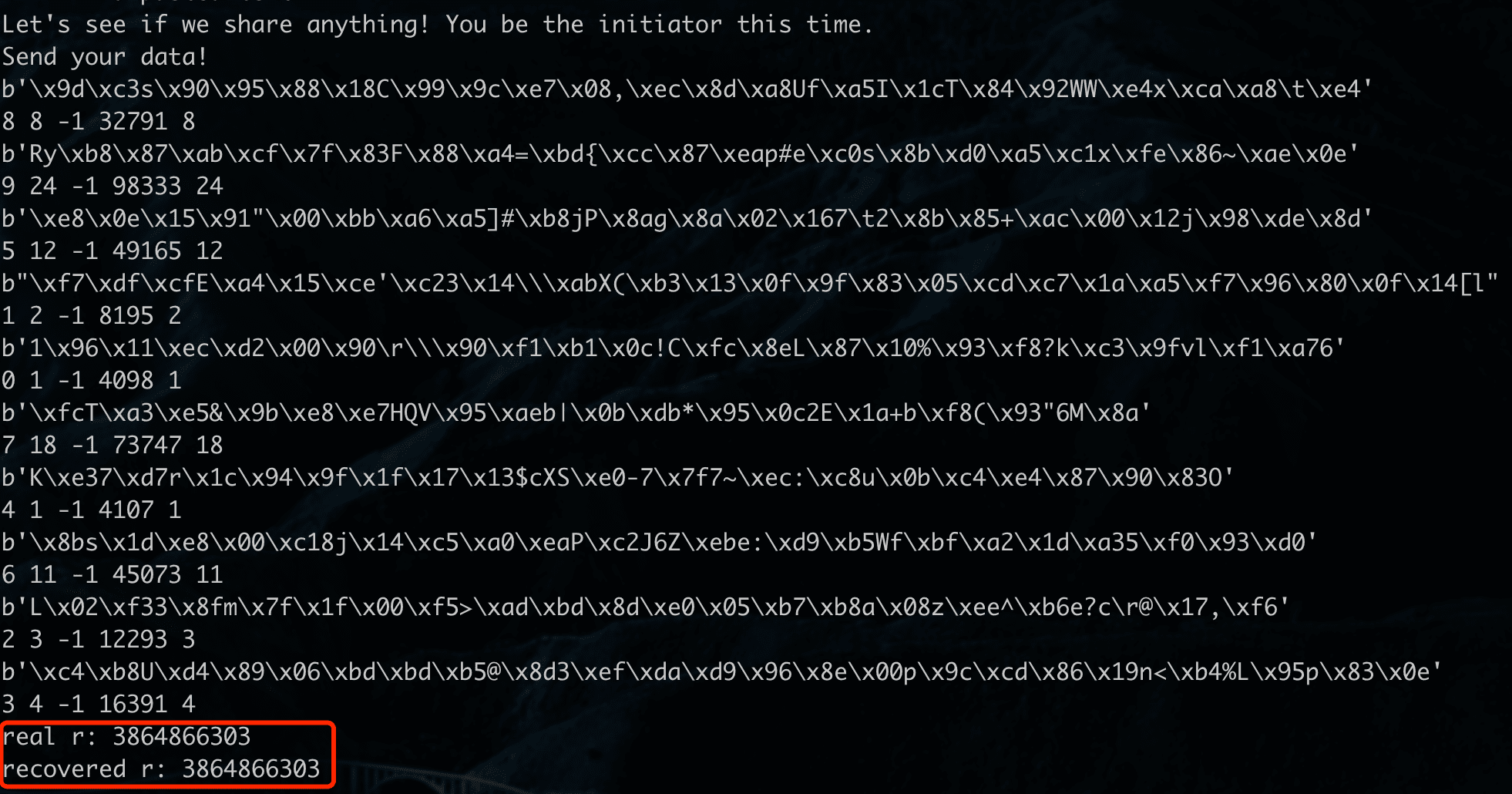 What left to us is the first half of the server set s, which is produced by calculating $H(i + 25037\cdot r \cdot c)$. Since we have recovered r, we can continue to brute force by guessing all the possible c and check if we share those elements with the server.

Recovering r can only be done when handle_client1 finishes. In handle_client2, there is no chance for us to mount the brute forcing attack any more. So, it is impossible to recover the first part if we have recovered r.

We manage to think out all kinds of ways that we can recover the first part. We also try many other attack surfaces, only to find nothing useful.

So, there is no way that we can recover the whole server set s?

Alright, I accpet that.

But the challenge is solvable.

It soon occurs to me that, there must be some way that, without the knowledge of the whole server set s, we can pass the checks in handle_client2, .

What if I only have knowledge of just a few elements of the server set s. Can I pass the checks?

Following this idea, I look into the checks again. The checks don’t include any information about the server set s. What they depend on are the 2 input sets provided by us, which looks suspicious.

The most strict requirement is that, the masked_s set (which is directly provided by us) must be equal to the masked_c set (client_s' multiplied by b'). The only difference is b'. We cannot recover b' since it is a very hard discrete log problem. What we can get about b' is the server provided server_s.

By recovering r, we have the knowledge of most elements of the server set s. And b' multiplied of these elements are given to us by the server.

Acutally, we can somehow construct two sets that satisfy the requirement and pass the checks, by using only one known element $H(y_i)$ and its b' multipled $b’ \cdot H(y_i)$. The following will show how.

The fact is that we even don’t have to recover r to pass the checks.

Notice that the server set MUST contain an element $H(1)$.

This is always True in that, when calculating the second part of the server set, the enumerator k starts from 1 and the result of k + CONST * (r % k) is 1 in the beginning.

As a result, when processing handle_client2, one element of server_s must be $b \cdot H(1)$. We can arbitrary select one from server_s, and get the correct one with the probability of approximately being $1/n \approx 1/4000$.

By using this known element, we can construct client_s as

This is enough to pass the checks…

It turns out that only one shared element is enough to pass the checks.

What we assume at first is that we must recover all the elements. What a miss!

Running the script on 20 threads for about 1~2 hours, we finally capture the flag.